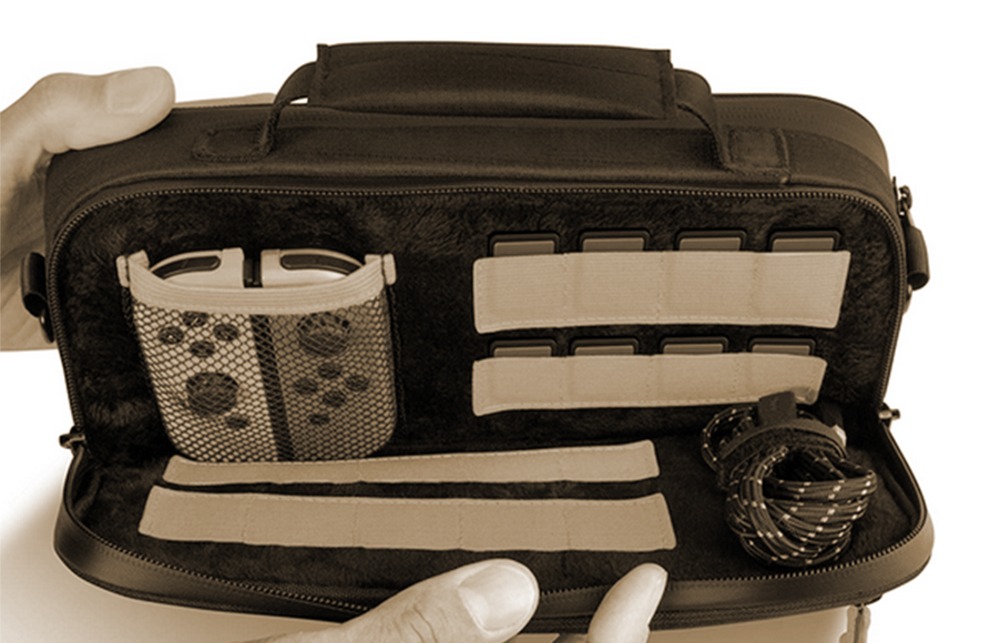 Nintendo Switch has been a relevation to gamers. And if youâ€™re reading this article, ‘6 Best Nintendo Switch Battery Cases 2021,’ you know that with the love for the Nintendo Switch, has created a desire for protection. While Fortnite was capturing hearts, I guess people at both Epic, as well as Nintendo, saw a potential that was left untapped and worked on it. A charging case that charges fast is the overall goal. If not a case that protects – protects well.

Even though Iâ€™m not a big Fortnite fan, but I must say, getting this game on already big Nintendo Switch library was a wise move. A move was so big that in a â€œfortnight,â€ the fan following around the console grew bigger than usual.Â

Now, we know that with the massive 4310 mAh battery, the Nintendo Switch itself is capable of giving you 3 hours on the action, but letâ€™s be practical!Â Is it enough – not for a long stint?

So, gear on because things are going to get serious! Have a look at all contenders for 5 Best Nintendo Switch Battery Cases.

The Commuter with a built in power bank, USB C charging cable is the gamer’s number one option for extra juice while you’re on the move. Lets be clear this is a very cool looking case that uses a checkered textured nylon and matte feel which will be a draw to gamers. A mini Nintendo Switch icon in the left bottom corner is a cute touch.

Compartments are well thought out. A central compartment is made from pearl cotton that is soft yet prevents 8 game slots, (plus ten more on the other side from slipping out). A mesh compartment snuggly keeps a pair of joy cons secured. Neat velcro nest to that holds a charging cable. The next compartment holds the console itself and is soft as the back of shampooed kitten. Easy to carry and containg that whopping power pack, the Bionik is bongkers good for gamers.

Check its price out on Amazon…

ZeroLemon’s beast battery pack for the Nintendo Switch comes with a 10,000mAh battery that according to the company, would help in adding around 10 hours of runtime to your Nintendo Switch. Other notable features include a kickstand, micro USB port as well as a USB-C port, and an SD card slot too!

ZeroLemon Extended Charging Case comes with enough room for up to three game cartridges. The only downside to the ZeroLemon Extended Charging case one could find is its size, although seeing that it’s 10,000mAh of a beast, it’s distinct enough for it to be bulky. But when compared to other similar battery packs, this particular case is a bit on the bulkier side. Still, again, that should be considered a trade-off for such a massive battery, considering you might get an additional 10 hours of SOT on your Nintendo Switch. These are some of the reasons we have included this in our list of best Nintendo Switch battery cases.Â

The Nyko Power Pak when held in hand, you would notice that itâ€™s both slim and lightweight, so it’s a no-brainer to take it on your next plane or road trip!

The Nyko Power Pak is a mid-sized 5,000mAh pack, which according to the company, â€œShould be able to double the battery life of your Nintendo Switch.â€ And according to me, thatâ€™s good if you donâ€™t want your switch to lose its beauty.

The Nyko Power Pak comes with two sliders that hold the pack’s top and bottom pieces together, preventing accidental bumps and keeping the battery pack from dislodging and falling.Â  The Power Pak can be charged through a USB-C interface, and a cable for the same is provided in the box. There are four indicator lights on the Power Pak that let s the user to check its charge level instantly.

Summing it up, Iâ€™d say itâ€™s a slim battery that wonâ€™t add much weight to your Nintendo Switch, nor make it look like a brick, and hey! Itâ€™s cheap too!!! What else you need from one of the best Nintendo Switch battery cases? 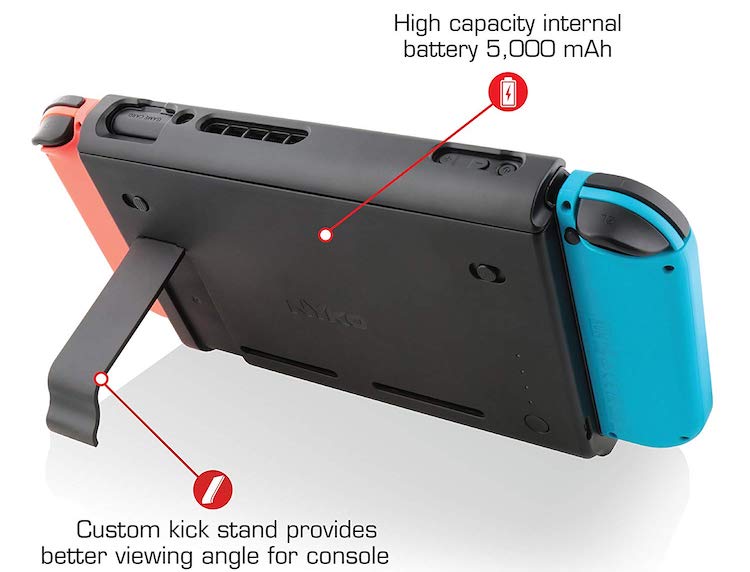 The Efficien Compatible with Nintendo Switch Battery Case should be named something else, as it makes your Nintendo Switch look like a tank due to its bulky size and design. This case has a 10,000 mAh massive battery on it with two kickstands on the back, with three different tilting positions offered, so that the user can align it according to their choice.Â

Thereâ€™s a row of LED lights on the Efficien Nintendo Switch battery case that displays the current charge level of the pack, and a USB port on the side lets you know that you can charge this bad boy and your Nintendo Switch at the same time.

I recommend this best Nintendo Switch battery case to anyone who isnâ€™t a fan of big bulky designs and appreciate the extra juice theyâ€™re going to be getting with this one.

This snap-on Bionik Power Plate Duo – Multi-Function Portable Battery Bank Case is less messy and more portable than other battery cases you can find on the market in 2019, and with 2 battery packs with 5,500mAh each, this best Nintendo Switch battery case doesnâ€™t compromise on juice either.Â

Despite its more than adequate capacity, this battery case is portable enough that it isnâ€™t visible from the front while it stays attached to your Switch, so expect a little added weight you wonâ€™t find anything else of unease when using the Bionik Power Plate Duo – Multi-Function Portable Battery Bank Case.

Have I told you that you get two joy-cons hand grips with this one? 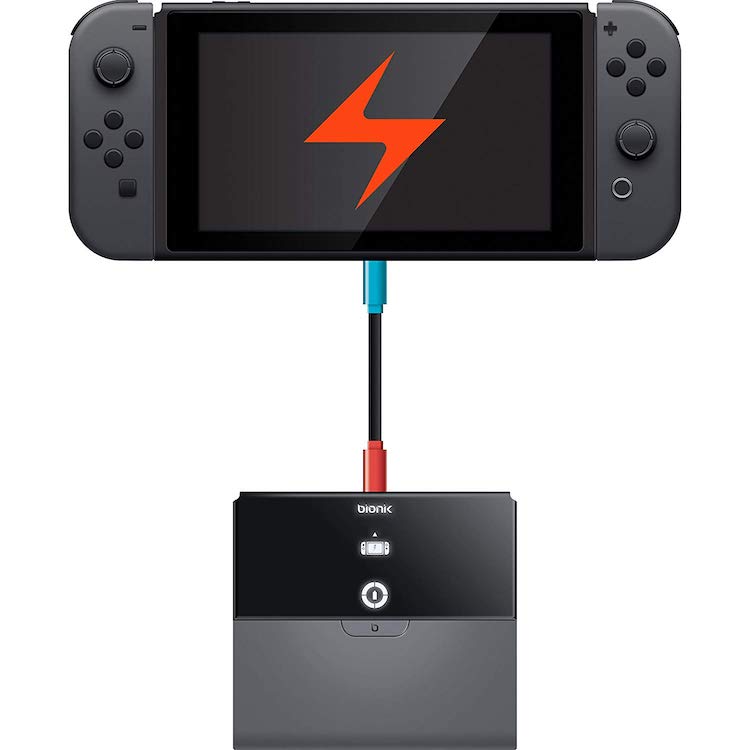 YOBWIN Portable Backup Charger Station Case has all the required features people would ever want in a charging station case, including an adjustable kickstand, a game card slot, and a traditional USB port so you can charge it whenever you need a charge.Â

This particular charging case comes with two Joy-con grips on it, so you donâ€™t have to use yours! This one is not that expensive too and that is the reason we’ve kept it in our list of best battery cases for Nintendo Switch.Â

If you are thinking of buying a gift for a friend or loved one why not read our article on the best external, portable storage drives. 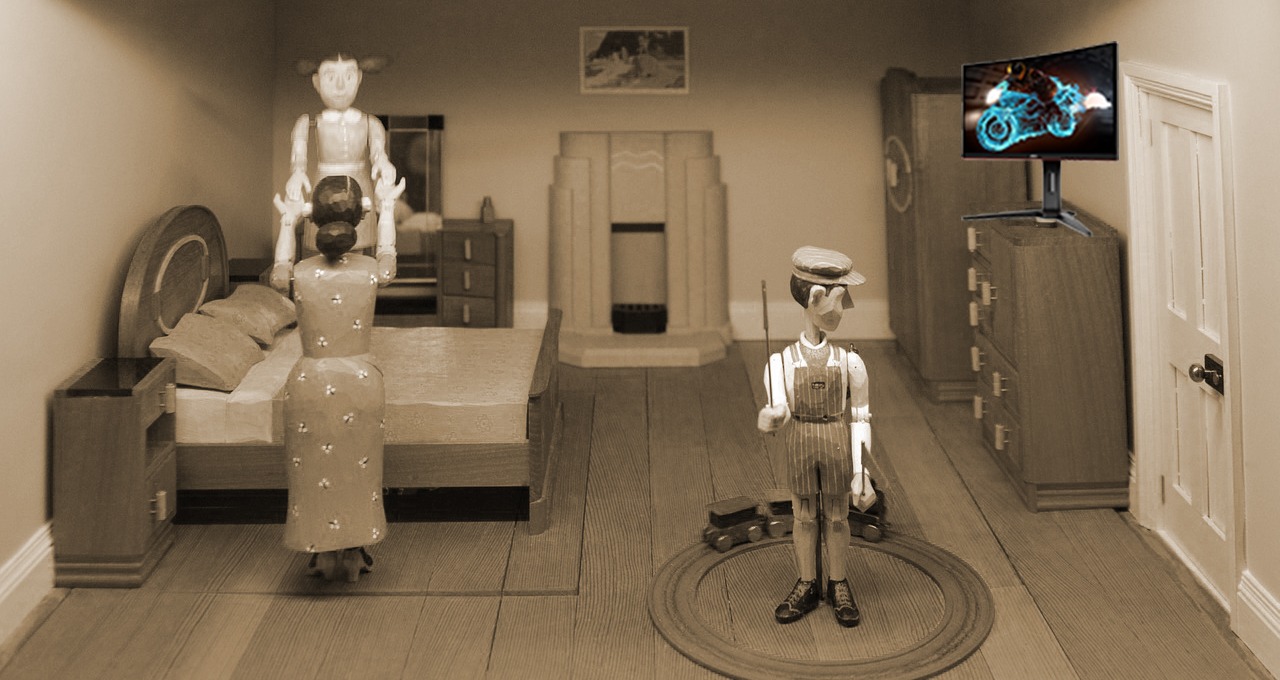